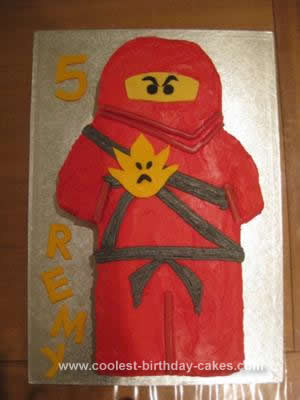 My three boys are obsessed with the new Lego Ninjago sets. Here is a cake of Kai, the red and coolest Ninja, made for my middle son’s 5th birthday.

I used a vanilla cupcake recipe poured into a slab tin. To get the shape, I simply looked at a red Ninjago man and traced a larger version onto greaseproof paper and then cut the shape out. I used red buttercream icing as the base, I refuse to use royal icing or fondant for kids cakes, because, let’s face it – the results may look great, but it actually tastes terrible, and the kids never really eat it.

I firmly believe that birthday cakes are for eating as well as looking at (although, I did use sugar paste for the fine details in yellow – there is only so far you can go with buttercream…). A couple of tips: buttercream can be tricky to get nice results, so I recommend freezing the cake once the shape it cut out, then, during the defrost, do an icing crumb crust using a slightly-watered down version of the final icing.

Once that has dried, do the final icing coat and smooth out any lines using a knife dipped in hot water. The final details such as the belt can then be piped on – also using buttercream.