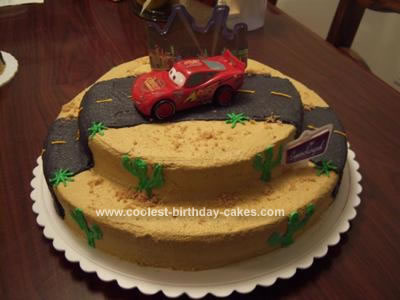 This Lightening McQueen Birthday Cake was done for a friend’s son for his first birthday. His room is decorated in Disney Cars, so that’s what his mother requested.

The bottom tier is a 14 inch round, white cake, and the top tier is a 10 inch round, chocolate cake. I used homemade buttercream icing for the whole thing. After icing the base brown, I used a paper towel to press on the icing to get the rough, desert sort of look for the ground. I did the same on the black top road. I piped on the lines in the road, the cactus, and the bits of grass, and sprinkled brown sugar around to look like loose dust in the desert. The plastic signs and the Lightening McQueen toy is a kit from WalMart.

I also made a smash cake for the baby, which was a miniature replica of the large cake. It was a 7inch round white cake, with the same decorations and technique as the two tiered one. I used a smaller Lightening McQueen on the top that I found in the matchbox cars in toy section.