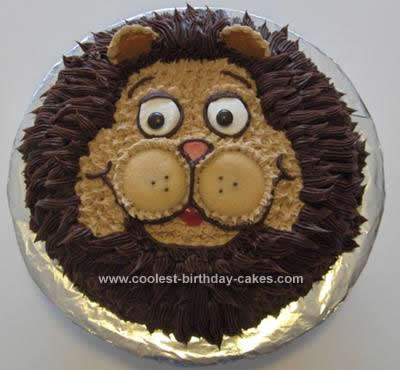 After I found your website I had a good idea of how to go about making a Lion Cake Design. I also got some ideas from Parenting Magazine to use Marshmallows for the eyes, M&Ms for the pupils and fruit chews for the nose; then my husband suggested using Vanilla Oreo Cakesters for the cheeks and fruit roll-ups for the tongue.

I tinted vanilla icing with a little brown food coloring for the face, and used chocolate icing for the mane. I made little holes on the cakesters cheeks (I used a toothpick) and put brown sprinkles inside them. (The magazine called for brown string licorice but I didn’t find it at the store so I had to improvise). The ears are Nilla wafers.

In the end I was very happy with my cake and I only used a round 10 inch pan. I had no idea what the cake would look like in the end, which was exciting and scary at the same time.