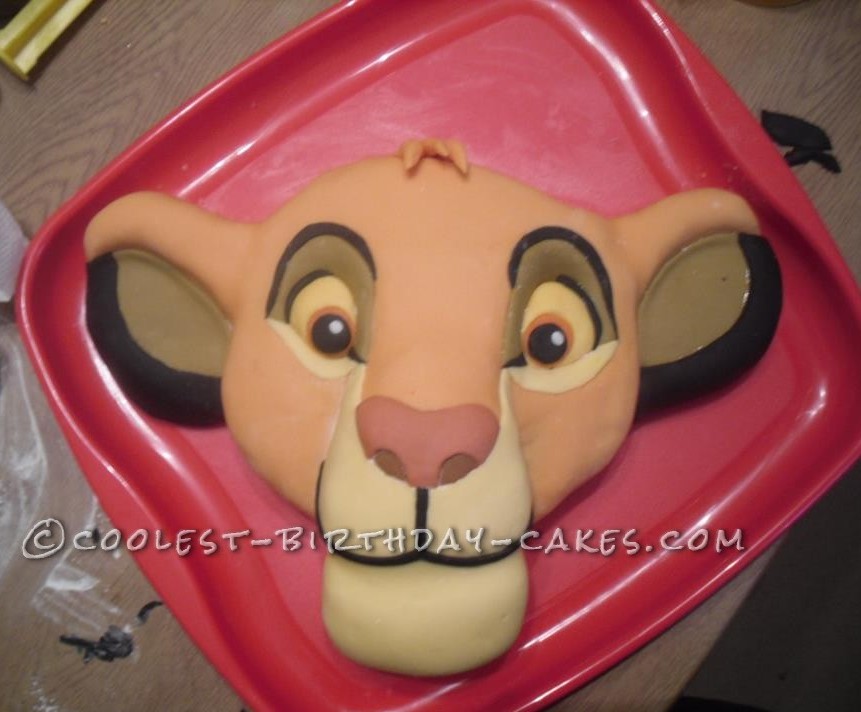 My 3 year old daughter is mad for The Lion King at the moment, and since we were going to the zoo for her birthday, I thought that she would love a Simba cake. Even though I have only ever made one birthday cake before, I thought I would give it a go.

I started off by making 3 x 7″ round vanilla sponge cakes and 1 in a small loaf tin. I stacked 2 of the round cakes and filled them with butter cream.  Then, using a picture as a guide, I cut around the edges to make the shape of the face and curved the edges to make it more rounded. I used the other round cake to make the ear shapes and the loaf cake for the nose and mouth. I also carved out 2 hollows for the eyes. I stuck it all together and crumb coated it with butter cream.

Then it was time for the fondant. I really struggled to get the color right with the fondant. I think it was because I only had cheap liquid food coloring.  I never did get it as bright as I wanted, but the fondant started to get sticky so I had to make do. I covered the whole thing with the main color and then used cut out pieces of the other colors to make out the features. I actually had to run to the shop half way through to pick up some black fondant (I didn’t buy it earlier because I never thought I would get to that point without messing it up!).

The most annoying part was the mouth, I spent ages trying to get it right. At first I tried using a clean play dough tool which made spaghetti shaped strands, but the fondant was too hard to push through so I had to cut a thin strip.

Overall, I am really pleased with how it turned out. I have never done anything like this before and never actually thought that I’d be able to pull it off. The chin ended up longer than it should have been and the fondant was a bit creased behind one of the ears, but my daughter thought it was perfect and the look on her face was well worth the hours of work that went into it!