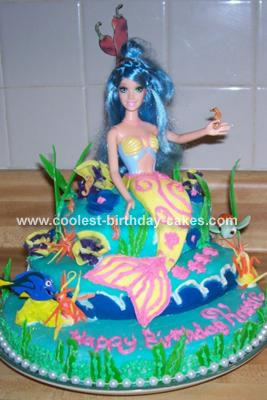 My daughter was turning four and wanted to have a Little Mermaid cake and party. Then she decided that she wanted it to be a combined pirate/mermaid party since it was going to be a coed party. As I took her to shop for party supplies she then requested that we also have Nemo characters. After all they live under the sea too. So I found Dori & Squirt from the movie Nemo at Dollar Tree & she already had a mermaid Barbie.

Two days before the party I made one layer each of a six, an eight and a twelve inch pan with 2 boxes of store bought funfetti cake mix. The same night I made my fondant so that it would have time to set up. I found a great recipe that’s forgiving, tastes great, inexpensive & so easy to make. The recipe and lots of tips can be found at http://whatscookingamerica.net/PegW/Fondant.htm.

Wrap the cakes well with plastic wrap & refrigerated. To create the tall seaweed I colored a small amount of fondant green. Then rolled it out on a corn starch dusted surface & using a pizza cutter I made wavy haphazard strips in different lengths. I dusted the bottom of a wide tupperware and put them in single layered leaving room to put the other decorations.

For the Sea anemone I used yellows, oranges, and pinks (bright colors) and rolled them out snake style about 1/8″ diameter. Dusted them with cornstarch and put them in with the seaweed. For the other plant life I chose two or three colors and rolled them out about 1/8″ thicker than you want them to be. Cut them into strips at different widths but no wider than 1/2 inch. place the widest color closest to you on rolling surface brushing the top edge lightly with water.

Take the next color and slightly over lay it onto the first color where you put the water. Repeat again if you used three colors.Then slightly roll them length ways. This will leave you with a single multicolored strip. Take it carefully and roll it kinda like a pinwheel, but you must crimp it and kinda smash the base of the flower as you go. It’s similar to making a candy rose. No need to dust it just put it in with the other plants. Seal tightly and refrigerate.

The next day I colored the remaining fondant with gel coloring & set aside to stay at room temp. Ice a cake layer,starting with the largest so you can stack them, with a thin coat of store bought icing and quickly cover with your rolled out fondant. Repeat the same way with the remaining layers. I didn’t center the layers, instead I stacked them as far back as I could. So that I would have wider “shelves” or steps in the front of the cake. I rolled out a darker blue to make waves for the center layer.

And made her tail out of yellow fondant using the scalloped edge of a serrated knife to gently push in scale like imprints. I then took icing to attach all my fondant pieces to the cake. Try to use a color of icing that matches the piece of fondant that you’re attaching. For the anemone I put a marble size dab of icing on the cake and cut the premade snake pieces into similar lengths(don’t be exact) and gently pushed them into the icing.

Mix the colors up and have fun with it. Last I piped details in, like stamens, seashells, swirls on her tail, white froth on the waves and filled in empty space around seaweed with greens squiggles. It ended up being a complete hit at the party. Hope this helps with your next cake!