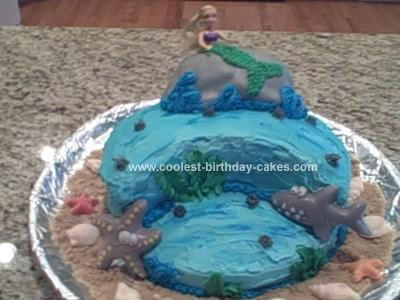 My daughter wanted a Little Mermaid cake for her 5th birthday. I am not very creative so I “borrowed” ideas from this site and came up with a combo of many different cakes that I saw.

I found molds at the craft store and made seashells, starfish, and the shark from almond bark. I had never done anything with this type of candy before and learned after trial and error that you must use special candy coloring that is oil based or the candy will get lumpy and hard.

I also found a recipe on line for homemade marshmallow fondant. This was extremely easy to make and tasted much better than the store bought kind I have used in the past. I used the gel decorating frosting in black to tint it grey. I then used the part of the second layer that was cut away and shaped it into a rock covering it with the fondant. I used a Polly Pocket for the mermaid. The rest of it was frosted in buttercream frosting.

I used brown sugar sprinkled around the cake to look like sand and then placed most of the shells that I had made in the “sand”. My 5 year old was impressed by the “cake sand”.