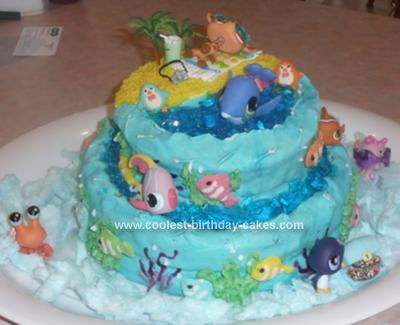 My daughter is a huge LPS fan so it was only logical that we would make (yet another) Littlest Pet Shop Cake – A Day at the Beach for her birthday.

This time I made 2 round cakes (1 bigger than the other). It took 3 packets of Greens cake mix to make the 2 cakes. I then placed the smaller of the two cakes on top to use it as a guide so I could remove the section of the bottom cake that I would later fill with Jelly.

I then mixed the fondant with blue and green food colouring to get the colour I wanted for the water (making enough to cover both cakes). I used apricot jam to stick the fondant to the cake. I then placed blue fondant over the bottom cake and filled in the area I had cut out for the jelly. This just gives the jelly section a nicer finish rather than having cake crumbs through your jelly.

I mixed up some green butter icing and piped on the sea weed. I used white icing (just icing and water) to make the wave effect and the fish bubbles. I also used fluro gel pens for the other seaweed.

I then mixed some of the white icing with yellow food colouring to spread over the beach section then sprinkled this with yellow sprinkles to give the grainy beach effect. I also made the beach towel out of fondant and just lay it on top of the beach. The small fish and penguins I brought from the local candy store.

Finally I placed some of my daughters LPS animals and accessories along with a toy palm tree we had to give the final effect. The one mistake I made with this cake was to put blue Candy floss on the plate to make it look like more sea – although it looks good in the photo by the time the kids came to eat the cake the Candy floss had crystallized in the air and there was only a few scraps left. Still looked okay but not the effect I was looking for.