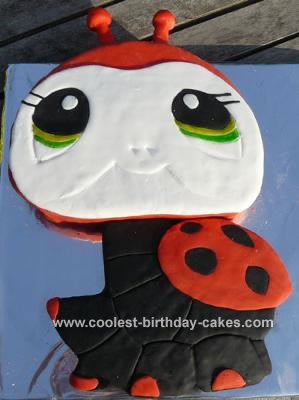 My daughter loves the Littlest Pet Shop ladybug – which we had quite some difficulty getting hold of for her birthday last year. This year she decided she wanted a littlest pet shop ladybug cake – she doesn’t ask for much! I had a long think about how I was going to achieve a passable attempt at this and came up with the following solution.

I made two 8 inch round cakes, one slightly deeper that the other. I took a photograph of her ladybug which I then resized and printed to use as my template ! The deeper cake was used for the head and basically had the bottom third of the circle cut off.

The smaller cake was used for the body and I had to cut around my photo template. Red, black and white fondant icing and a lot of fiddling later and this is the result !