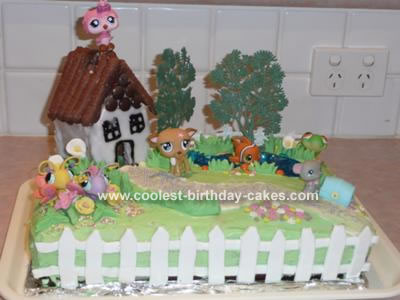 My daughter was turning 7 and absolutely loves the Littlest Petshop so we decided to base her cake around that theme. The idea was to have a house with a garden and pond.

I used 3 x Pack Cake Mix (Chocolate flavour)for the base. Blueberry jelly for the pond, a basic butter icing for the base icing and then coloured and shaped Royal icing for the flowers, grass clumps and white picket fence at the front.

I actually used my daughters playdough cutter to press the grass & leaf shapes out. It was much easier than trying to shape them myself.

The house is made of Gingerbread with Chocolate fingers for the roof. (I tried to stick the house together using normal icing but it took way to long and it wasn’t strong enough – next time I would use white chocolate (or something similar) to put it together as it sets fast and strong.

Sprinkles were used on the path and around the flowers to add to the effect.

My daughter was thrilled with the end result of her Littlest Petshop cake (so was I). 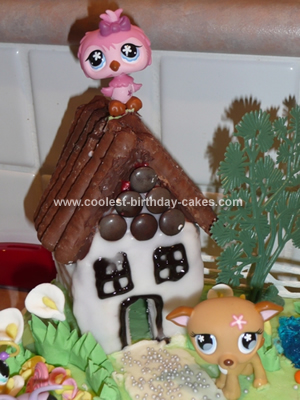