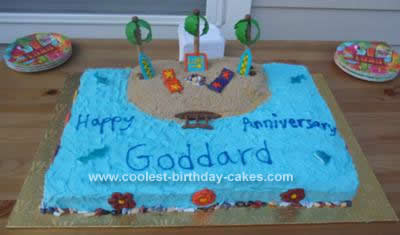 My son’s daycare was having a luau themed 2nd anniversary party, and they asked me to make the Homemade Luau Cake. A week before the party, I made all of the decorations that are on the cake out of royal icing (palm leaves, flowers, chairs, sign, surf board); the palm leaves were taped to an empty paper towel roll tube to form the curve shape. A week was a good length of time for the royal icing to dry before I made and assembled the cake.

For the cakes, I made a double layer 11×15 red velvet cake filled with cream cheese frosting, and a double layer 11×15 lemon cake filled with blueberry compote and blueberry cream cheese frosting; these cakes were put side by side to make a 15×22 cake. The island was made from red velvet cupcakes that I made with left-over batter.

The assembly of the cake was fairly straight forward since I had sketched out what I wanted to do on paper. I made a double batch of butter-cream frosting and tinted about 80% of it a sea blue; the rest was colored a tan (sand) color. I covered the 15×22 base with the blue and created waves with a large off-set spatula. I then set the island, that was put on a piece of cardboard, onto the base cake, and frosted it with the sand colored frosting. For the actual sand, I sprinkled light brown sugar on the entire island.

Once the cakes were frosted, I set up all of the royal icing decorations. The palm tree leaves were attached to piroulette cookies with extra royal icing and fondant coconuts were put on the tops and around the bases of the trees. I added an outrigger canoe made out of fondant and a fire pit made from chocolate rocks that I bought at a candy store; I also used these chocolate rocks around the entire base of the cake. The flowers were placed on all four sides of the cake to create a tropical feel. Then I added some gummy sharks to fill in the empty water, since the base of the cake was big. Finally, I wrote with blue gel the “Happy Anniversary Goddard” (for The Goddard School) to blend in with the water.

The owner of the daycare, and all of the parents and teachers, loved the cake. 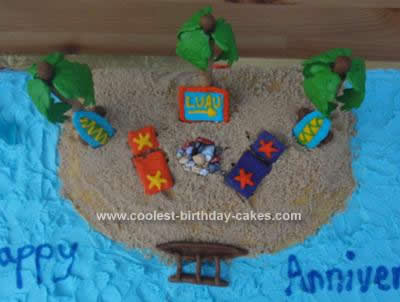 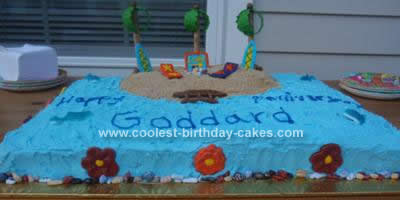 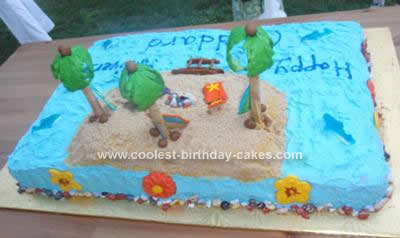