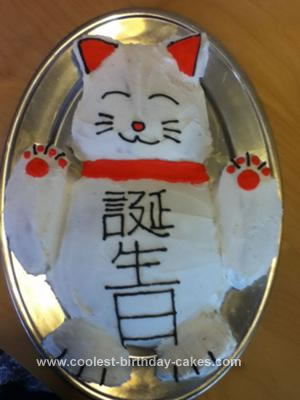 I made this lucky cat birthday cake for my husband’s birthday. He likes cats, but I wanted something unique and more masculine and adult than most cat cakes. I used the Betty Crocker Halloween Black Cat cake pattern as a starting point, but I cut the tail into two front paws and used the ear pieces for back paws. I made a yellow cake mix in two 9″ round layer pans and for ears I used two cupcakes I had previously baked and frozen. This also could have been done by baking two layers and a batch of cupcakes. Leftover cupcakes freeze well and are handy to have!

I made an extra large batch of white icing, reserving about 2/3 of a cup to color red and another 2/3 cup to color black. I had never made a cake by cutting and pasting before and I was genuinely surprised that I cut the pieces so well free-hand! I shaped the pieces to better fit together by shaving them a bit with a bread knife and “glued” them together with the icing.

I had initially thought I made an inordinately large amount of frosting, but as I went I realized I was using a ton of it for “plastic surgery” on my cat. I still wound up with quite a bit leftover when I was finished. Icing also keeps quite nicely in the freezer and it’s nice to have some left for the next birthday.

Once my cat was assembled and frosted, I decorated it with red ears, black outlining and red toe pads on the paws. I also added the traditional red collar. Then I looked up ‘happy birthday’ in Japanese characters and discovered it wouldn’t all fit, so I just piped in ‘birthday’ on my cat’s tummy where a Lucky Cat would normally be holding a coin.

My husband loved the cake and thanked me many times, even the next day. The kids all thought it was really cool, too! 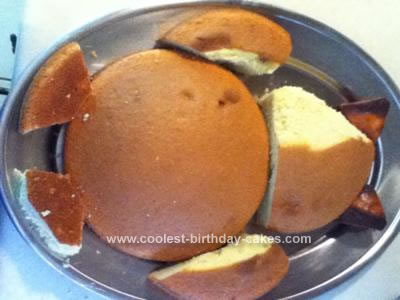 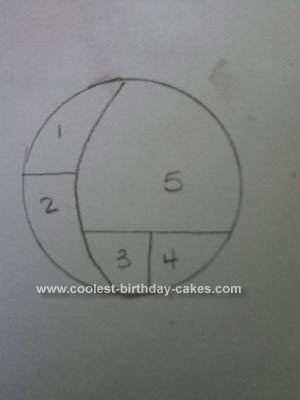 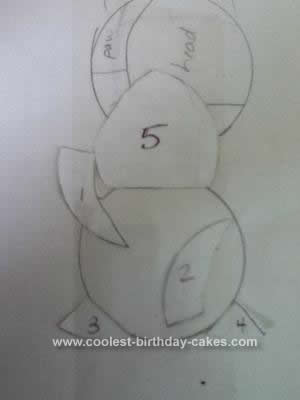