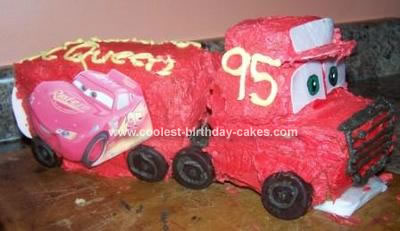 To make this Mack the Truck Birthday cake, I used the ideas from other Mack cakes I found on this site; they were great!

I baked two box cakes in 9″ x 13″ pans, cut them in half lengthwise and then cut about 1/3 of the length off. I stacked three of the halves, which would be the trailer, wrapped them in saran and froze them; the layers were white, chocolate, and then again white.

I baked one more box cake in a bread loaf pan, cut it in half and used one half for the bottom part of the cab, shaping the other half into two parts for the eyes and the hat. I cut a flap for the visor of the hat out of a foam plate, stacked the cab together, wrapped and froze it too. I think freezing it may have helped it stay together during the frosting. I also used a little piece of scrap cake between the cab and the trailer to separate it.

I raised the cab to make it look more realistic and used homemade frosting, similiar to the Wilton recipe, and red food coloring. The white part of the hat and the eyes were cut out of the foam plate; I used green and black sharpies for the eyes and white-out for the highlight in the eyes.

I used york peppermint patties for the wheels and grey frosting for the rims and the grill. I was going to use oreo stix for the smoke stacks but forgot. That looks very cute on the other cakes on this site.

I couldn’t fit ‘Happy Birthday Christian” on the top of the trailer so I just wrote ‘Lightning Mcqueen’. Instead, I wrote the greeting on the stone under the cake. The pictures on the side and back were printed off my computer.

This was so much fun to make and my 3 year old was so happy with it. I don’t think I’ll ever buy a store-decorated cake again.