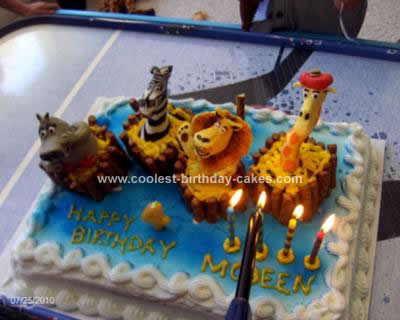 My son loves the Madagascar movie characters and so it was a clear choice when his birthday came. I searched for readily available decorated cakes but could not find one that would really capture his heart. So I decided to embark on my own Madagascar Birthday Cake.

The cake was a basic vanilla cake frosted with vanilla buttercream. For the blue color of the sea, I used Duff’s Graffiti spray-on food color. The crates were made from pound cake surrounded by pretzels and held together with a little bit of icing. The figures are made from store-bought fondant which I tinted with a few drops of food coloring to get the right shade. One tip that I found useful is to make sure I tint more fondant than I would need for each character or color because it would be harder to come back and match shades later on.

For some of the accents (Gloria’s starfish), I used softened Starburst fruit chews and molded it into shape. I then used fine tip food color pens to draw on the details on all of the characters.

I had fun making this cake and was rewarded with the smiles of my 4 year old as he decided it was time to reach in and eat Gloria and Melman before anyone else got to it. Am glad they were edible.