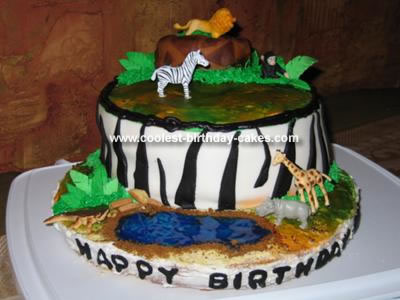 For my daughter’s 3rd Birthday she wanted a Madagascar party. After looking through the beautiful cakes on this site I combined a couple of different ideas. The bottom tier is a single 12 inch marble cake with butter cream frosting. The second tier and the small third tier are both devil’s food cake with butter cream frosting and covered in fondant. The top tier was covered in light brown fondant and I cut out shapes in dark brown fondant.

A trick I used to get the natural shape of the “spots” was to cut the pieces out and then lightly roll over them with a rolling pin. I topped this tier with a bit of green frosting. I used Wilton tip #233 to make the grass on the cake and then I topped the cake with “Alex” the lion looking over everyone on the Savannah.

All of the animals were plastic and were made by “Safari Ltd” and called the “Wild Toob” (they make various toobs, zoo, farm, ocean, etc. and were purchased at Michael’s.)

The middle tier has white fondant around the outside with black fondant zebra stripes. The top of the cake was the butter cream frosting that I airbrushed with green and orange to get the Savannah coloring. The leaves were gum paste dyed green and cut out in the shape of a leaf (I cut free form using a knife although Wilton makes leaf fondant cutters) and then small cuts were made along each side to make it look like a frond.

I made the leaves in two different color greens to give it a “real” look. After the leaves were cut I placed them over a paper towel roll or a rolling pin to get the shape right although a few of the leaves need to be straight too. I made the leaves a few days in advance to let them dry.

On the bottom tier I used blue gel icing for the water and used the suggestion from this site to use brown sugar for sand. I broke up a Nilla Cookie to create a rock formation. The lettering around the tier is black fondant attached directly to the butter cream frosting.

Two things I would change if I were to do this again: first I would use pound cake or at minimum use pound cake for the second and biggest tier. The little top tier started to sag, especially because it was not centered but placed on the edge of the second tier. The second thing I would change, I would band the bottom cake in fondant because I think the butter cream frosting looks messy in comparison to the other two cakes.

The cake was a HUGE hit and I was proud because I am not even good at frosting cakes so decorating like this was a challenge. But I loved every minute of it!