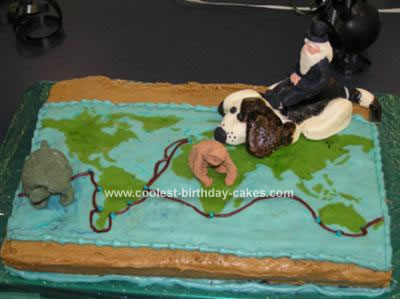 This map cake was to celebrate Charles Darwin’s 200th birthday. (Yes it’s a science geek thing). The cake is vanilla cappuccino (you can make a buttercream icing but add a bunch of espresso instead of milk or cream to get an incredible flavor).

To get the map (which is a map of the route that Darwin took on his voyages around the world) onto the cake, I printed a copy of it in reverse, taped wax paper over it, piped it the way I wanted with buttercream, and put it in the freezer for about an hour. Flip it over onto the cake and voila!

To make the figurines, I used white chocolate truffle (it’s easier than you think, you can Google search for a recipe) and just dyed and formed it. For those of you non-science geeks, the ship Darwin was on was called the Beagle, hence the reason he’s riding a dog – just a weird science joke.