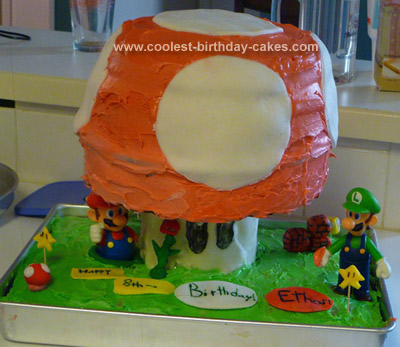 My son, now 8, was very specific about what he wanted the Mario Bros. Power-Up Mushroom Cake to look like. It had to be a Power-Up mushroom that stood up on the cake, not flat.

I started by baking a 12×16 base cake. I iced that with green icing so it looked like grass. I found some round cardboard containers at Dollar Tree that reminded me of pipes from the video game. That didn’t work for pipes but I cut out a hole in the cake center and put the container in there. That was my stem and it was supported by the bottom of the cake pan (I didn’t take that first cake out of the pan). Then, I put a 9″ round cardboard circle on top of that, set another 9″ round cake PAN on top and covered that with another cardboard circle. This made the stand stronger and I didn’t have to bake yet another cake, the party wasn’t going to be that large!

Then I covered the container “stem” with fondant tinted slightly tan. I make 2 more 9″ round cakes, one with a beveled top. I stacked those on top of the “stem” and empty pan (fake layer)and carved the top to look more like a mushroom. The whole thing was then covered in frosting tinted red. I cut large fondant circles (5) for the spots on the mushroom. Underneath the cake, we placed some PVC characters, fondant stars, bricks, question mark blocks, etc. There is also a row of gold plastic coins on the back side under the mushroom.

Next to the cake, we put a tray of mini cupcakes iced green with tiny round fondant circles on them to look like 1-ups. My son and all his friends were thrilled by the cake! It worked really well to “fake” the stem and 1st layer of cake. I wasn’t worried at all about the weight being too heavy.

Coolest Mario Bros One Up Cake