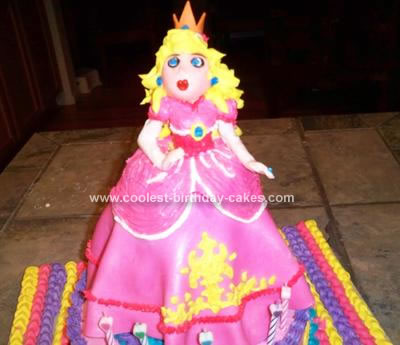 This Mario Brothers Princess Peach Cake I made for my daughter’s fifth birthday. She loves “Princess Peach” from Super Mario Bros. and she wanted a Peach cake. I made several round cakes.

One of them I used for the bottom and frosted with buttercream and piped a border using a star tip around the top and bottom edge of the cake. I then stacked the other round cakes on top of each other and cut away at them to form a sort of cone shape for the dress. I put some wooden dowels in the bottom cake to support the princess. I put her on a piece of round cardboard and placed her on top of the dowels. The princess part was slightly elevated from the bottom cake to make it more stable.

I piped some squiggles into the open space using a round tip, so you couldn’t see that she was elevated. I lightly frosted the dress in buttercream. I rolled out a circular piece of pink fondant and draped it over the top of the cone, and cut a hole out of the top. I used some metal tubes to make a space to put the body into. I just pushed the hollow tubes into the top center of the cake and took them out, the cake stuck inside the tube and made a cavity so I could place a Barbie without a head into the dress part of the cake.

I made the head out of fondant. I just shaped and molded it to look like a head and squished it onto the Barbie body. I piped a little yellow design on the dress using a round tip. I used a small round tip to pipe on the top of her dress and the design around the waist. I used a small star tip for the bottom border of the dress. I piped the eyes out of frosting and I painted the lips with red frosting dye.

I made the crown out of fondant and piped on the designs. For the hair I used a large round tip and piped from the head out to form little curls. Then I placed the crown on her head. I made gloves out of fondant and wrapped them around the barbie arms which I had put a little bit of frosting on, so they would stick. Then I covered the cake board with a round tip piped design. If I made this cake again I would roll the fondant out thinner because it was quite heavy and started to tear after awhile.

It was a hard cake but she loved it!