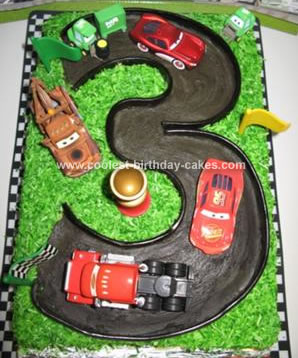 I made this Mcqueen And Friends Cake for my special boy for his 3rd birthday, really had fun making it! My first tip is, make sure you are not disturbed while decorating!

First I made the actual cake a week ahead, its Neopolitian inside. I made 3 packet mixes, one chocolate, one vanilla and one orange (which I added a little colouring to get it hot pink). I baked that all together in a big tray. I did this ahead of time and then froze the cake.

I then made the frosting. I used a butter cream one, for the green frosting a few drops colouring, for the grass I used the shredded coconut and coloured it in a zip lock bag. To make black icing, I started with chocolate frosting, then just added all colours till it got dark, it looked greyish but when set in fridge looked nice and black like tar.

The number 3 I used 1m long licorice straps for the track barriers. I cut them down a bit with a knife, then I used toothpicks to position it on the cake. I frosted the green first then stuck on the “grass” and then filled in the inside black of the track, smoothing a bit with some water on a pastry brush.

After it was done I took out the toothpicks, then the fun part was putting on the cars, which were extra presents. I found a Pixar Cars placemat (another pressie) and the background picture I used from one of the boxes that Mater came in.

My son’s eyes popped out when he saw his surprise cake. He loved it but, he got very upset when it was time to cut the cake, pleading don’t cut it.