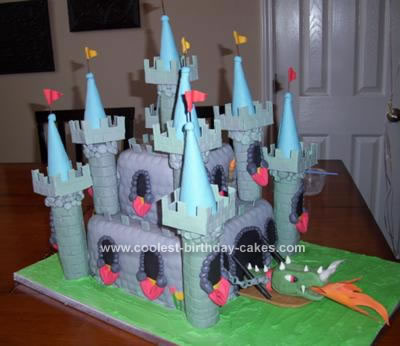 The cake was approx. 15” tall and 13” wide. Bottom layer was 5” tall, top layer was 4” tall and towers add the remainder of the height. Everything was edible with the exception of the pennant sticks, smoke from dragon’s nose and drawbridge sticks. Cake board was wrapped in fancy foil then covered with buttercream. Front of cake had pet dragon chained to tower. Back side of cake had back door open with dragon tail sticking out. I call this a 360 degree cake in that it had fun elements on all sides.

One week in advance of party:

Made dragon head & tail from fondant 3 weeks in advance. Made fire from marbled gumpaste and shaped around small rolling pin to give a rounded look. Made dragon collar, chain, teeth and torches from gumpaste. Smoke from dragon’s nose is cotton wrapped around toothpicks which were inserted into the nose before the fondant dried.

The Drawbridge door and back door were made from marbled gumpaste and used a wood grain plastic mold to give wood pattern. I made turrets and towers using premade rice krispie treats and shaped into oblong cylinders. Press treats around a dowel rod to shape towers and provide strength. Wrapped all towers in 1 layer of fondant. Dimples from krispie treats show through but can be covered with brick pattern.

Note: You can size out the height & width of towers by building a model of cake using paper diagrams.

I made pennants using gumpaste. Pennants laid out on wire racks to create the wavy (blowing in the wind) look. Attached to toothpicks with gumpaste glue and small strips of fondant to hide toothpick.

Made red bunting from gumpaste. Allowed to dry on tower so that bunting would have a slight curvature. Made battlement squares from fondant, rolled slightly thick, using small square cookie cutter. Attached to top and sides of castle using gumpaste glue.

The cake was stacked using dowels inserted into first layer and leveled with the fondant. The top tier towers/turrets were positioned on dowel rods to keep them from sinking into the layer they were sitting upon.