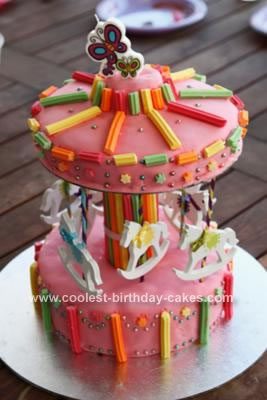 I found this cake in the Women’s Weekly Kid’s Birthday Cakes book and decided I had to make it for my twin girls (Grace and Hannah) first birthday on the weekend.

I started on Friday, making the cakes (I used packet cakes – Betty Crocker Super Moist Vanilla Cake), to keep in the fridge and decorate on Saturday (our party was on Sunday). The top part of the cake worked out fine, but I had a few problems getting the bottom cake high enough, so I ended up combining 2 mixes. I think the packet mixes are intended for a 20cm round pan, I was using a 23cm round pan.

I used the ready to use icing as suggested in the book, which I found quite easy to colour. I got a Wilton’s colour paste, as I had heard stories about the watery colours taking forever to tint the icing. I had a few problems rolling it out as it kept sticking to the bench, no matter how much icing sugar I put out!

Once I had covered the cakes, my hubby and I started gluing the decorations on. The recipe suggested using an egg and icing sugar mixture but we had a few bubs coming to the party that are allergic to egg (I used an egg replacer in the cake too) we used the frosting mix that came with the packet cakes, tinted the same colour as the roll out icing. We were up until 2am on the Saturday night, gluing the decorations, and then it took me a good part of Sunday morning to assemble the homemade merry go round 1st birthday cake, gluing the horses to the skewers and putting it together.

I’m really happy with how it turned out (I was convinced late on Saturday night we were going to have to go out and buy something in the morning, when I couldn’t get the icing to work) and everyone at the party loved it!