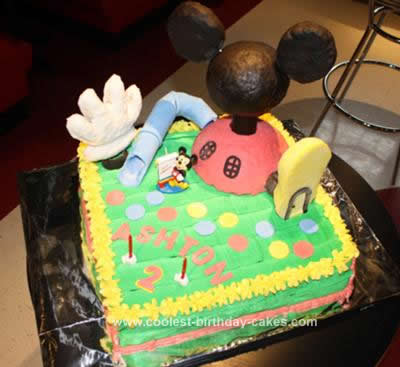 For my nephew’s 2nd birthday, the theme was Mickey Mouse Clubhouse. I wanted a majority of the cake to be edible, so I made this Mickey Mouse Clubhouse Cake idea from a combination of rice krispy treats, cake, buttercream icing, and fondant. Because this was my first ever endeavor with fondant, I bought it in white and chocolate rather than making it, the rest was homemade.

First, I made the rice krispy treats. I made a single batch and formed it into a bowel for the bottom of the clubhouse. After that, I made a double batch and out of that formed the two ears, a round head, the foot and the hand. I found that wearing rubber gloves that got sprayed down frequently with cooking spray was really helpful in free forming all the shapes.

Next, I took white fondant and colored a portion in red, some yellow, and some blue. For the black, I used chocolate fondant and added some black coloring. I covered all the pieces with fondant several nights in advance and used wood skewers. For the neck, ankle and wrist, I used a paper towel roll that I hot glued skewers into that I then stabbed into the rice krispies. I made sure to use two skewers for each connection so that the pieces wouldn’t twist. The name, 2, and stepping stones are all from fondant as well, using cookie cutters. The most difficult part for me was the slide, which I had considered omitting, but after putting it all together, I felt it really needed it. I used a wrapping paper roll that I cut v-notches into the top 6 inches of the roll, and used a hot glue gun to form a candy cake type shape. I then held it at the angle it would go into the clubhouse at and cut the bottom of the slide out.I then covered in fondant.

I used a 16-inch square pan for the base of the cake. I made one cake in yellow and one in chocolate. I cut them in half and stacked them into a two layer cake with buttercream icing in between.

For the buttercream, I ended us making 8 batches of the Wilton recipe buttercream, with the addition of almond extract (same amount as the vanilla extract). I colored one batch red, one yellow, left two white, and the rest were green. The white I used for layering the cakes. I used a large 2-inch tip for the edge of the cake, followed by a star pattern around the seam. I used that same tip for all across the top of the cake as well. I then used a round tip for the red around the base, and a large star for the ‘fence’ around the top of the cake.

I transported the cake to the party without the pieces on top. Once there, I put the rice krispy/fondant coated pieces on top. The mickey and candles were a candle set you can buy at local super stores.

This was my first ever double layer cake, and first time working with fondant. In all, it took about 10 hours to make, but seeing my nephew’s face and hearing him sing the ‘Hot Dog’ song and dance when he saw it was well worth it!