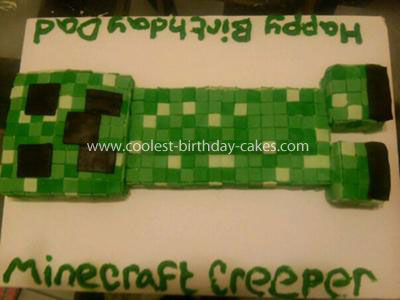 I made this Minecraft Creeper cake for my dad on his birthday. I mixed up the pound cake and baked them in two 9 X 13 pans for about 40 minutes. While the cake was baking I made the middle filling by whipping cool whip and Pillsbury vanilla frosting together, then I cut up some strawberries into thin slices to put in the middle as well.

I took the cakes out of the oven and out of their pans to cool. Once they were cool I cut out two large squares, four small squares, and one long rectangle. I put my filling and strawberries in between the two large squares and in between the two feet. I arranged the pieces with the large squares on top for the head the long rectangle in the middle for the body and the small squares on the bottom for the feet. Then I covered the whole cake in buttercream frosting, and put it in the refrigerator for a little while.

While the cake was cooling I colored and rolled fondant a light green, medium green, and dark green. I cut out A LOT of little squares with the smallest square in the Wilton’s square stencil pack. Then cut out five squares out of chocolate fondant with the biggest square for the eyes and mouth. I added all the squares to the cake in no special pattern.

This cake was very time consuming but fun.