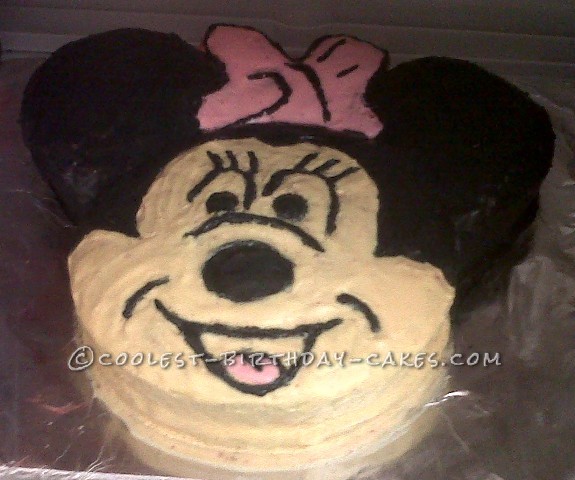 I made this Minnie Mouse cake for my daughter’s 3rd birthday party. This is my 5th cake to make. I Googled Minnie Mouse images and used one for a template. Since it was a small template, and I couldn’t get it to print out any bigger, I just used the picture as a guide. I baked six 9 inch round Duncan Hines Red Velvet cakes, and one 8 x 8 square cake: two circles for the head, two for one ear, and two for the other ear (since it was a double layer cake), and the square cake for the bow. After I baked them, I placed them on a large wooden cutting board covered in foil and I wrapped the whole thing (board and cakes) in foil (you can also use plastic wrap, and then placed them in the freezer over night.

Next, I started making my icing; for this, I just looked up a simple recipe for butter cream icing. For this particular cake, I used 1 cup of butter, 1/4 cup of vanilla, 16 cups of powdered sugar, and 1 cup of milk. I had plenty of icing left over! After making the icing, I put it in a container and left it in the refrigerator overnight. The next day, I got the cakes down from the freezer, carved the ears to fit the head (creating an arch at the bottom), Next, I carved the square cake to make the middle and the top half of the bow so that it would fit in between the ears. After carving the cakes, I dyed my icing, separating it into 3 bowls first. The first bowl was peach for the face (since I didn’t have any peach dye, I used a very little bit of pink with yellow), the second bowl was pink for the bow, and the third bowl was black for the ears.

The icing was melting pretty quickly, so when you’re not using it, it’s best to keep it in the fridge. After applying the first layer of icing (and a layer of icing in between the cakes), I placed the cake in the fridge, taking it out later in the day to apply another layer of icing (this was to cover up the cake crumbs you could see mixed in the first icing layer. In order to make the face and outline of the bow, I used a long, thin, icing spreader, dipping the tip into the black icing, then carefully dabbing the cake to make the face/outline. Finally, place the cake back into the fridge until it is ready to be eaten. 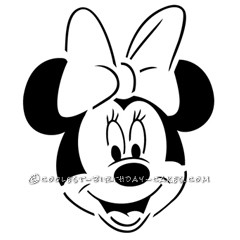