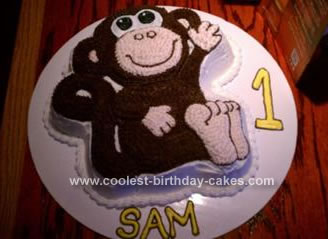 I made this Monkey birthday cake for my youngest son’s 1st birthday. I used the Wilton Monkey pan to bake it. I iced the sides in white icing and then made the outlines on the cake with tip #3. I tinted some icing brown and some with a tiny bit of peach and brown and starred it on with tip #17. Then I added the shell border in white with tip #18.

For the smash cake, I made a cake with the mini bear pan. I carefully trimmed the ears off the top and attached them to the sides of the head. I had some scraps left from leveling the bottom of the big cake, so I took some of those to make a tail and to add on to the feet a little. I piped the peach/brown icing onto the face, ears and feet, then starred the rest with the darker brown.

For the finishing touch, I tinted some icing yellow and wrote his name and the #1 and then outlined them in brown. He loved it and made a huge mess! 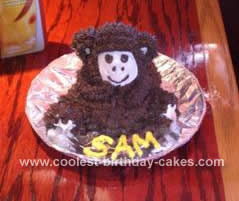