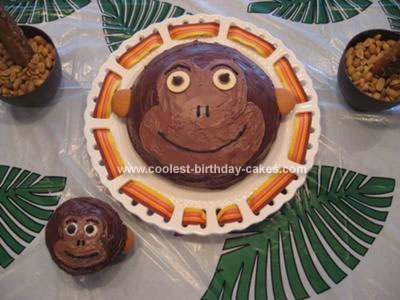 I made this monkey cake for my son Blake’s 2nd birthday. He LOVED monkeys so he had a monkey themed party and I made a monkey cake and a jumbo cupcake monkey just for him.

I used regular boxed yellow cake mix and baked it at 350 for about 40 minutes in a well greased and floured glass bowl. I saved a bit of the batter and baked a jumbo cupcake too. When the cake had cooled, I turned it out onto a platter and “drew” an outline of the monkey’s face with a knife. Then I mixed chocolate frosting with a little bit of vanilla frosting to get the lighter brown color of the monkey’s face and used the chocolate to frost the rest of the face.

I frosted the cupcake the same way. I used black frosting from a tube to pipe the eyebrows, nose and mouth. (You could also use black licorice strings.) The monkey’s eyes were white candy melting wafers with a chocolate chip in the center attached with a dot of frosting. The cupcake monkey’s eyes were dots of white frosting with chocolate chips. I pushed Nila wafers into the sides for the ears.