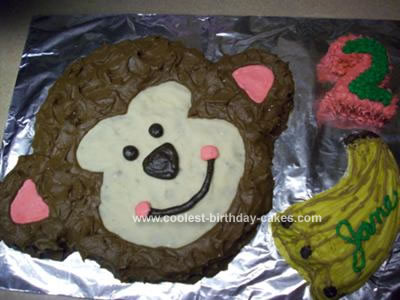 I made this monkey cake for a friend’s daughter’s second birthday. She wanted a monkey cake so I used boxed cake recipe to make two 9in layer cakes. I used one cake for the head. The other round cake I used to carve out two ears and a number two (for the birthday girl’s personal piece of cake).

I even had enough left over to make a banana bunch. I used tinted buttercream icing for most of the cake, but I used chocolate buttercream for the brown on the monkey’s head.