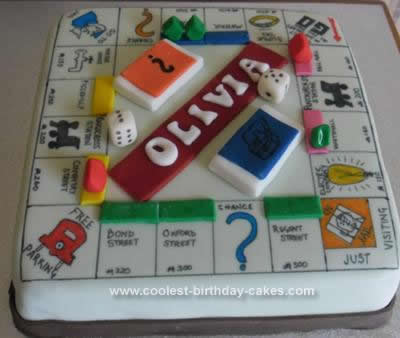 This Monopoly Board Cake was the latest cake I did, a request from my friend to do her daughter’s birthday cake, and her sister came up with the idea for a Monopoly board, with the instructions to just do the best I could. Luckily my children have a Monopoly board so I was able to use that for referance.

The little girl is called Olivia and I thought I’d come up with an original idea of putting her name in the middle of the board instead of the word ‘monopoly’, but when I googled monoploy board cake I found someone else had already thought of it!!

The cake is an 8″ square madeira with strawberry jam and buttercream in the middle. I covered the cake in mint green sugarpaste then left it over night to dry. Next day I began to make the board using edible pens to draw on all the details. I had to pick and choose which places to include as I could’nt fit them all on. The dice, chance and community chest cards were all made using gumpaste, stuck on later with edible glue.

I must admit I loved this cake and only finished it the afternoon of the party so thought after all that work it was’nt going to be around for long, but luckily my friend had bought a spare cake and kept this for a family party the day after!!