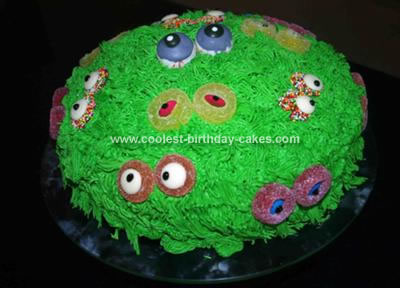 My son’s fifth birthday was approaching and he loves monsters so we adopted this as the theme.

I searched around on the internet for inspiration and found this great site where I found Molly’s wonderful interpretation of a cake she found (thanks Molly!). This inspired my Mum and I to have a go at a Monster Birthday Cake.

I found a Wilton icing tip used for the soccer cupcakes grass affect (this can be found on the Wilton website), bought some Wilton green icing and used the Wilton buttercream icing recipe.

We made a plain chocolate sponge to keep this part as simple as possible. We made the eyes first and used jelly jube rings for around the eyes as well as freckles, for the inside of the eyes we used white chocolate buttons and smarties. For the little black dots in the eyes we used a black icing tube designed for writing on cakes. To stick the eyes together we used the same icing tube used for writing on cakes but it doesn’t set and some had to be restuck using the icing used for the green fur.

I found it was easiest to move the icing tip in a swirl like movement to make the fur look less like spaghetti/string just so I could get coverage and then went back to make the grass/fur like peaks.

Then we applied the eyes and touched up with the grass/fur icing affect where necessary and put in the fridge to harden.

The centerpiece eyes were monster eye candy rings which I got from eBay. I pushed each ring gently into the icing and hid what could be seen of the ring with the green icing again. Topped the cake off with a single monster shaped candle so as not to detract from everything else.

It was a great hit with the kids. Even the Mums all gathered around to see and were very impressed. A real success!