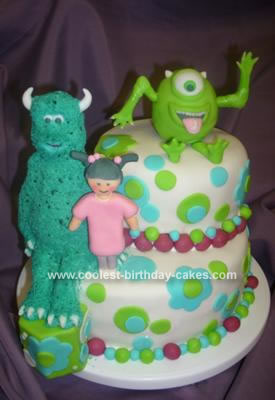 This Monsters Incorporated cake was homemade for our daughter’s fourth birthday.

The cake was covered in marshmallow fondant, as were the figures. Mike’s and Sully’s bodies were made out of cereal treats, then covered in fondant. I ground up coconut in my Vitamix to make Sully’s fur, then colored it with food coloring.

I made Mike, Sully and Boo well in advance, so they would be completely dry and so I would not be overworked on the actual day of decorating. However, I made Mike’s and Sully’s legs on the day of the party, so I could attach them to the cake with royal icing. That’s about it!