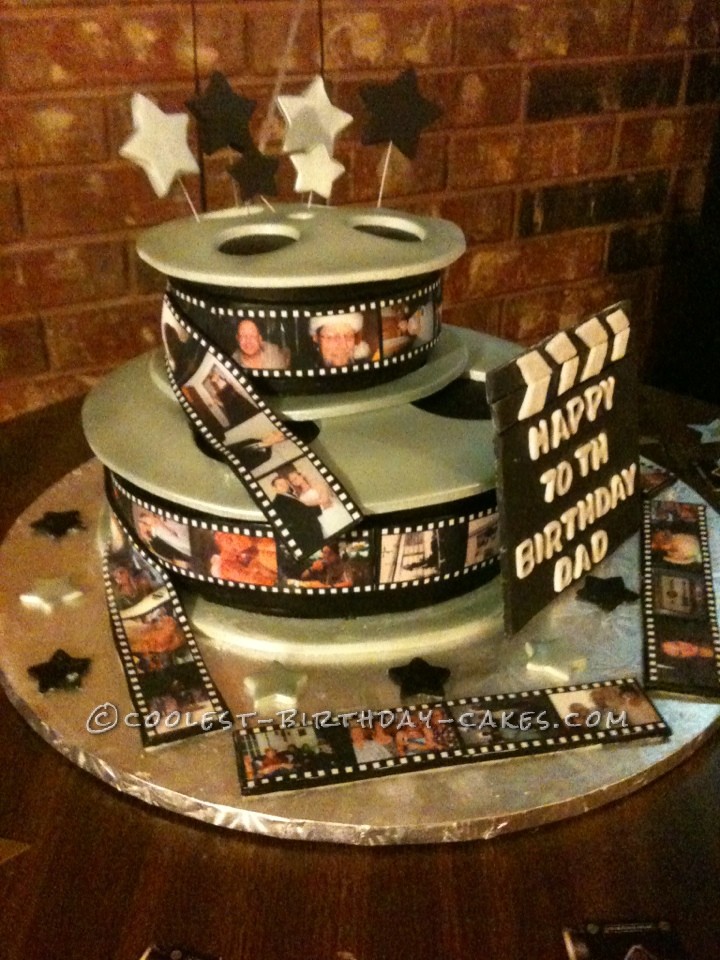 I wanted to do something special for my father’s 70th Birthday, he has overcome a lot over the past 5 years losing my mother and oldest brother to pancreatic cancer, his mother to heart disease and his second wife to a sudden illness. Our family is very close so we wanted to give him a special party for his 70th.  I thought long and hard on ideas for his cake and this is what I came up with!!

I used a 10″ cake for the bottom reel and a 6″ for the top real, covered them both in fondant and then I made the tops of the reel out of gum paste and let them dry and then airbrushed them silver. I picked out several pictures that I thought would bring a smile to his face. I dedicated the top real for his grandchildren and the the bottom reel for the early years of his life and his children, these are edible images. I made the clapper board out of gum paste and just added cut out letters and since he is the star of our family I put stars on the top and board.

I can say that he was absolutely speechless when he saw the cake, it brought tears to his eyes!! He looked at all the pictures and was in disbelief that he could eat this cake, he didn’t want to cut it!  And of course people were coming into the party room just to look at the cake making comments like I cant believe that’s not real and that it was actually a cake!!

I have to say he was very pleased with his cake!!

2 thoughts on “Coolest Movie Reel Cake for My Father”