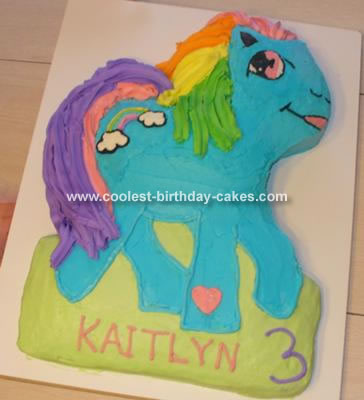 This My Little Pony cake was huge. ( I have a large family and a close network of friends, needed a big cake for at least 30 adults and their kids).

I used a loaf pan for the actual body of Rainbow Dash, and carved the curved back shape into it. The lower half (legs and green background were cut out of a 9 x 13 cake pan and the head was cut out of a round cake pan. Yes I used 3 separate cakes, I actually froze each one, to make it easy to cut them and then put a crumb coat of icing on them, (a crumb coat is a very thin watery icing that is slapped on, don’t worry about the crumbs mixed in, because you go over it again, the crumb coat just make sit easier to actually ice.)

Once I had the body iced blue, I did the mane and tail, I put a tiny bit of cake underneath the area where the tail and mane would be and then built it up using a very large star tip. I then used a tooth pick to draw the facial features on (changing it many times). Using a round tip I traced out the facial features and filled in the eye. To make the eye smooth, dip you finger in a bit of cornstarch and pat down the icing.

The one thing I should have done was exaggerated the curve of the ponies nose once it was iced, as you can see, it didn’t have the exact curve of a My Little Pony nose!