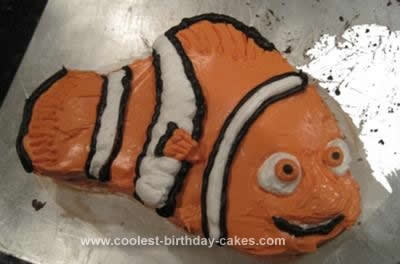 I only bake once a year: for my son’s birthday (soon to be twice a year when my daughter arrives). Last year I made a cake of the Muppet’s Swedish Chef, this year his favorite character is Nemo.

Nothing big as far as preparation: made from a regular chocolate Betty Crocker cake mix (cooled in the fridge about 45min), the icing is Betty Crocker whipped buttercream. Making this vanilla frosting orange was surprisingly taxing: probably nearly 40 DROPS each of yellow and red to get Nemo’s deep orange rather than a pale, fleshy color. Frosted the cake then threw some icing in ziploc baggies, cut the tips, and used them to pipe in the details EXCEPT the black trim which was out of one of those cheez-whiz black frosting cans. Then added some detail to the fins with a toothpick.

No molds, just a 9×13 and a picture from the internet that I tried to mock. And everything is made from icing, though I could see using M&Ms or similar for the eyes.

Hope my boy likes this Nemo Birthday Cake Design! By the way, should mention I’m a Dad: Mom does plenty of baking throughout the year.