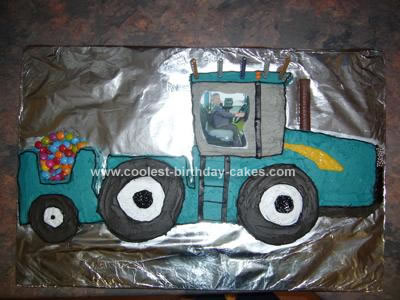 For my son’s 5th birthday he decided he wanted a tractor cake just like papa’s tractor. This was my first attempt at cake decorating, so after much researching, I took photos of the actual tractor from different angles and then enlarged them on the photocopier. Using a combination of tracing the photocopies and sketching freehand, I made a template on butchers paper.

The homemade New Holland tractor cake was made of 3 packets of Betty Crocker’s chocolate cake and I baked it in 2 large slab tins. I cut the template into 3 sections (to minimize cake wastage) and then laid on the cake and cut out. I rejoined all my pieces on a ply-board covered in tin foil.

The icing was the Wilton frosting recipe which I just added blue food colouring until I got the right shade of ‘New Holland’ blue (or close enough!). The black tires and gray cab were also Wilton frosting, but the white inside the tires was frosting out of a can.

The black outline and steps etc. was Wilton black writing and decorating icing tubes, as was the yellow New Holland strip. I used a choc licorice bar for the exhaust on the bonnet and silver cachous for the headlights. I filled the trailer with a load of smarties for extra colour and the finishing touch was a picture of my son, which I laminated and put in the cab.

Overall I spent quite some hours planning and creating this homemade New Holland tractor cake, but to see his face and how impressed his friends were at his party, it was definitely worth the effort. Only this year he wants a v8 super car!