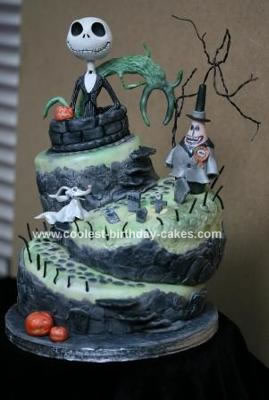 I made this Nightmare Before Christmas Topsy Turvy Birthday Cake for my son’s 17th birthday. I used to work in the Disney Store when he was a toddler I brought home NBC he was hooked even at that age and has loved it ever since, he has grown to love all Tim Burton’s work, which has inspired him to follow a career in animation when he leaves school.

This is the 2nd NBC cake I have made for him, last time it was just Jacks face on the cake, I decided to do something more challenging this time, so a wonky cake was in order which suits the NBC theme perfectly, it depicts a scene in the film where Jack comes out of the fountain as The Pumkin King. The graveyard just had to be there as well.

It took days of work but it was all worth it to see the smile on my sons face. I almost did The Corpse Bride but thought the “bridal ” theme might not be appreciated by a 17 year old! Maybe when he gets married? If his future wife approves.

I also love Tim Burton films so it was a pleasure to model the figures and detail the cake. I hope I have done justice to the