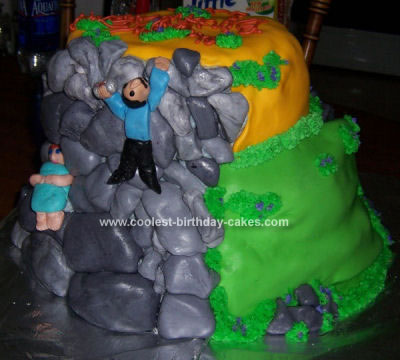 To make this cake I used 3 different sized round cake pans and pieced the cake together. I cut the layers in half and using cardboard cake separators

to keep things sturdy as well as a dowel pushed from top to bottom, I liberally used a homemade cake frosting (along the lines of buttercream

Once the cake was layered I then shaped it into a rather uneven and hopefully somewhat realistic hill shape. After that, I used the frosting to put a crumb coat on the entire cake as well as making sure there was frosting for people to have if they chose not to eat the marshmallow fondant I used for the rest of the cake.

I made the rocks and figures from the marshmallow fondant and had a lot of fun doing so. One person actually thought I might have used real stones for

the cake and that made me chuckle.

The cake depicts my brother-in-law hanging over the edge by one hand, with a beverage in the other as he attempts to stay on top the hill. My mother is sitting serenely down the rocky side of the hill, obviously having been on that side of the hill for awhile.

This was a cake that amused my family a lot and though it was a lot of work to put together it was well worth it.

Coolest Over the Hill Birthday Cake

Coolest Over The Hill Cake

1 thought on “Coolest Over The Hill Cake”