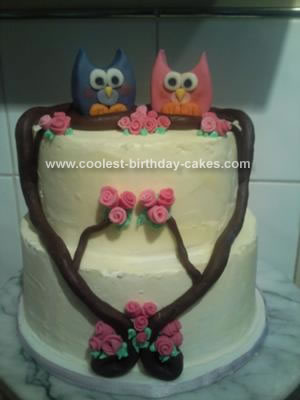 This homemade owl couple cake was made for my in laws combined birthday party. My mother in law loves owls so the cake happened from there. The bottom layer is a chocolate fudge cake with a chocolate ganache filling and the top tier is a lemon and coconut cake with a lemon curd filling.

The chocolate bottom layer was positioned on the board. It was covered with a decorators homemade buttercream which had meringue powder in it so it set to with a crust. The top lemon layer was placed on a cardboard disc and covered with the same buttercream. The owls were made out of marzipan which was coloured. The shape came from an oval cookie cutter which was inverted to cut out the head shape. Eyes, beak and feet were made with the marzipan also.

I made flowers out of flower molding paste by taking small portions and rolling it into a sausage shape, then flattening and rolling up to resemble a rose (which is the Mother in Law’s favourite flower). The chocolate *branches* are just chocolate modelling paste which was rolled into sausages and shaped into a heart design. Flowers were glued into place with green Royal Icing.