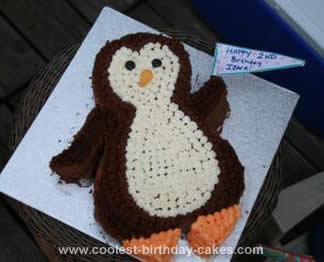 My daughter loves her stuffed penguin Pippy. It seemed to be the perfect cake choice for her second birthday. I drew the penguin outline, cut it out and used it to cut out the penguin from a 9 x 13 cake x 2 (stacked with frosting in btw). I then cut the inside part of the penguin stencil and lay it on the cake so I was left with only the stencil of the black part on the cake. This made it a lot easier to pipe the white belly and head in as I knew where not to pipe.

Instead of using black icing, ( I think black is gross and makes your teeth black) I used a LOT of cocoa to make a very dark chocolate icing. I removed the stencil and piped the rest in. The sides were frosted on with a flat utensil. The eyes are smarties and the nose is a Real Fruit Gummy (pear).

I used toothpicks to help the feet stay put (made from the remaining parts) and since they were out used one more toothpick to make a flag that the penguin held to celebrate the day.

The icing took some time to do as it was piped on but I liked – and more importantly – my daughter liked, the finished product. 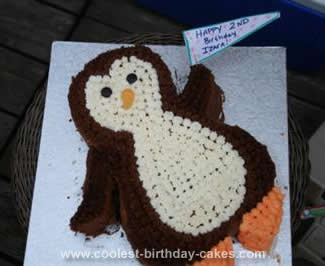