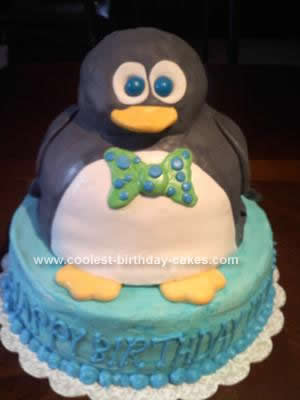 My friend said that her son would like a Penguin Birthday Cake Design for his 3 year old birthday party. OK, no problem! Well, after searching the internet for some ideas, here is what I ended up creating.

For the penguin, I made chocolate cake and I used the Betty Crocker “Bake N’ Fill” dome cake pan for the body. I frosted it with chocolate icing. For the head, I mashed some chocolate cake scraps with frosting and molded it into a ball. I had never done this before but I saw it on The Cake Boss so I tried it and it worked really well. So I stuck the head ball on top of the body cake.

Next, I made marshmallow fondant. I tinted some of it black, rolled it out and laid it on the penguin body. Then I cut a white semi-circle for the belly. I cut out white ovals for the eye and stuck blue gum balls in the fondant for the eyeballs. The beak, bow tie and feet are all colored fondant. I secured the beak on the face with a toothpick.

The cake was a huge hit. The birthday boy was super excited for his penguin cake. The guests really enjoyed the cake both looks and taste. There were actually only two little pieces left at the end of the party.