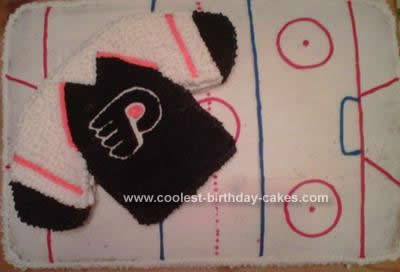 My boyfriend Marc is an absolute diehard Flyers fan! So, when I asked him if he wanted a Philadelphia Flyers Birthday Cake, I knew by his reaction there was no backing out.

The things you will need: One piping tip, one flower tip or two (one for each color), one sheet cake pan, one 8×8 cake pan, two small loaf pans (I used disposable), two large tubs of Wilton’s white decorating icing, blue, black, and red coloring, and lastly, toothpicks or string.

To help with the cake, I went online and downloaded several pictures of Flyers jerseys. If you are not good freehand, I would suggest you also print out a Flyers emblem and cut it out of cardboard so it’s the right size for your cake. The sheet cake (ice rink), is made with two flavor batters, half vanilla and half chocolate. The jersey is made of one 8×8 cake trimmed on the sides to a rectangular shape, and the arms are two small loaf pans.

When preparing the sheet cake remember that vanilla batter is generally thinner than chocolate, so if you have someone to help you it will be easier. Once your cakes are cooled and ready to be iced, first cover your sheet cake with white icing.

Then, to prepare the jersey, cut the small loaves on an angle so they sit flush with the rectangular trimmed 8×8 cake and place the pieces onto the base. Next, pipe out the Flyers emblem and piping on the jersey first and then fill in working from the inside out to avoid smudging your icing. Once the jersey is complete, use either a toothpick, or a piece of string to create a template to follow for the blue and red lines of the rink.

Use whatever finishing touches you prefer for around the base of the cake.