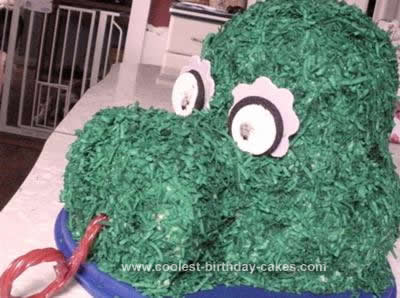 For my brother’s 30th birthday all he requested was a cake with coconut and he is obsessed with the Phillies; thus, the Phillie Phanatic Cake was born.

I started with a yellow cake, soaked in rum, coconut milk, and pineapple juice (make sure not to soak in too much or the cake will not hold up to sculpting later). I call it Pine Colada Cake.

The frosting began with a basic buttercream with crushed pineapple and coconut milk added to taste. Creating the shape of the cake was surprisingly easy. It was two layers of 6 inch round cakes; then three layers of three inch round cakes, with coconut shavings layered in between. The layers were sculpted for a rounder appearance.

The whole thing was frosted in green buttercream frosting, so the white wouldn’t show through. Then coconut shavings, dyed green by adding green paste in a zip bag (it took a lot of dye to get the right shade). The mouth was created by baking the batter in a Pyrex bowl. Now it was time to add the detail.

The tongue is a Twizzler rolled up and held up with a toothpick cut in half. The eyes were started with white chocolate chips. I melted them down and added purple dye. I then poured the white chocolate on to a baking sheet. I used a knife to smooth it out. Before the chocolate dried completely and became brittle I pressed flower cookie cutter into the chocolate and then scarped away the excess around it. I made a few extra in case one broke.

I then used Oreos for the eyes. It took a few tries until I pulled two apart with the frosting completely intact on one side. I then used black food paint to paint in the center.

The cake is very heavy so make sure to construct it on something sturdy. I also used dowels in the first two layers of 6 inch round cakes to support the 3 inch cakes on top. If I had realized how much time it would have taken, I would have made the Philly hat ahead of time, but I ran out of time. I had intended to make it out of molded gum paste.