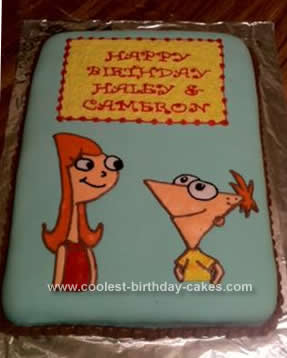 My children’s birthdays are just one day apart so I hold their parties together. My oldest is my daughter (turned 12) and youngest is my son (turned 5) and they both love the Phineas and Ferb cartoon. I didn’t want to have just Phineas and Ferb on the cake since it was also for my daughter, so I made it a Homemade Phineas and Candace Birthday Cake.

First, I made the butter cream transfers so they would have time to harden in the freezer. I couldn’t find an image that had both characters that I liked so I found 2 separate images and sized them according. I tinted vanilla butter cream the appropriate colors to make the transfer. For the happy birthday plate, I printed a reverse image and did a transfer as well. I put them in the freezer while I frosted the cake.

This was for their big party with family and friends. I also had a little get together a week later and made a Perry Cake. It is a chocolate 9 in round with 2 layers. I made Perry as a butter cream transfer. I covered the cake in vanilla butter cream and then followed by marshmallow fondant tinted green. I placed the frozen Perry on the cake and then piped the shells.