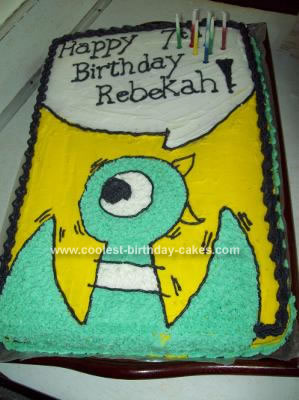 My daughter just loves The Pigeon books by Mo Willems so we decided to do a themed party of the Pigeon.

I baked this great cake in a large rectangular cake pan. I used both white and chocolate cake mix to make it half and half. I did this by simultaneously pouring in the cake mixes from the ends until they met in the middle. After cooling, I iced it with white homemade buttercream icing. I let it set for about 20 minutes.

While setting, I tinted some of the frosting black for the writing, outlining and edging. I tinted some aqua for the pigeon and some yellow for the background. I then iced the background and the 2 long sides plus one short side yellow. For the conversation balloon area, I iced it with white buttercream. I took a toothpick and lightly drew out where the conversation balloon and the pigeon were going to be. I then outlined with black frosting using a writing tip and did the wording. I switched to the star tip and did the top edging.

I then used the aqua frosting with the star tip and filled in the pigeon, except for the neck and eyes which I did with white and the iris with black. I carried down the icing on this short side of the cake to make the body of the pigeon. I used the remaining icing and did the bottom edging around the cake.

That’s it! My daughter just loved it!