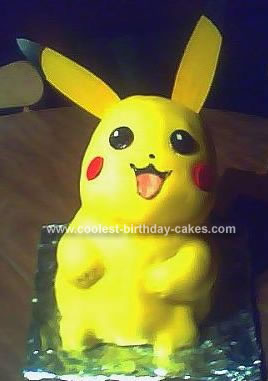 My daughter requested a “fun” cake for her 17th birthday. We came up with her old favorite Pokemon, Pikachu! I used photos and toys as reference to make this Pikachu Birthday Cake .

Scrapes of cake were cut to shape for the arms and feet. They were “glued” on with canned icing. The whole cake was covered with a crumb icing (canned). I tinted premade fondant bright yellow then made ears and tail out of foamcore and cardboard which were painted yellow to match.

Rolled out fondant, draped the whole cake (had to make seams on the sides). The eyes and cheeks were white Necco wafers with pupils painted out of black icing tint and cheeks painted with red.

Pickachu’s mouth was made and shaped out of a pink starburst and brown markings on his back were shaped and rolled out of a mini Tootsie Roll.

My daughter and her friends had fun with Pikachu. She cut the head off and used it for a second party the next day!