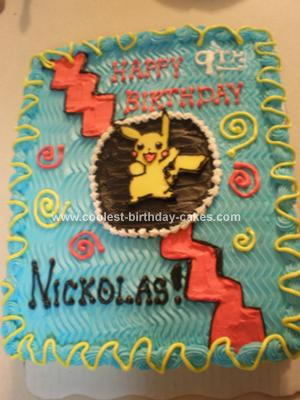 This Pikachu Birthday Cake was really pretty simple. I made it for my son Nick on his 9th birthday. He’s quite the Pokemon fan.

Now, the Pikachu was cut out of a box of Kraft Pokemon macaroni, used as a template, and copied onto fondant. I then outlined him in black and added the face. He then was placed on the cake after drying. I pipped an alternate spiral border with a #18 tip and used thinned down buttercream to make “string” on top of the border.