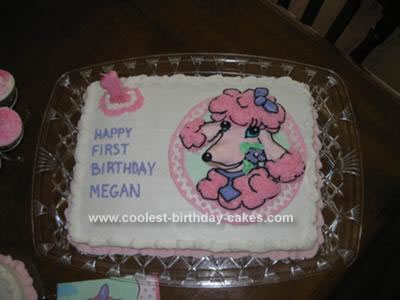 I am a 57 year old grandmother. When my children were younger, I made cool birthday cakes all the time, I was pretty much self-taught, with some initial hints from my mom.

Recently, my husband’s second cousin looked me up on Facebook. She admitted her ulterior motive in finding me was to get me to make a cake for her daughter’s first birthday. I had made cakes for her and her sister when they lived across the street from us years ago. She wanted one of “my” cakes for her daughter. She had a difficult pregnancy and this sweet little girl is her miracle baby.

I asked her to send me a napkin from her selection, which was the “Pink Poodle in Paris” theme. I looked all over the internet for ideas on a Pink Poodle Cake, but none rang true with me. I stuck the napkin on the fridge and looked at it for days. Finally it came to me that I’d just make a “cameo” of the dogs face, like the one on the napkin.

I took white chocolate almond bark and melted it and molded the “snout” in a foil cone and the “ears” in foil I just shaped by hand.

I baked the double cake mix sheet cake and iced it white with a pink reverse shell bottom border and a white top border. I took a small plate and used it to draw a circle. I iced the center mint green and then put a pink polka dot border around it.

The, I took the snout and ears and with a paring knife, I trimmed and sculpted it to the size I needed. Dug a small indention in the middle of the “cameo” and inserted the snout, so it was sticking out of the top of the cake. I just iced it and the ears with regular homemade buttercream (using shortening) icing. I used some cornstarch on my fingertip to make the icing smooth. Then, I just took a toothpick and “drew” the rest of the dog’s head on the cake and started icing.

I used the large and small “grass” or “hair” tips to make the curly fur of the dog, outlined it in black and just finished the small details, the dog tag, bow in the hair, etc.

So far, everyone that has seen the picture has loved it. It’s been a long time since I’ve baked much since my grandchildren live 2,000 miles away, but thought I did a pretty cool job (for a “Grammy”).