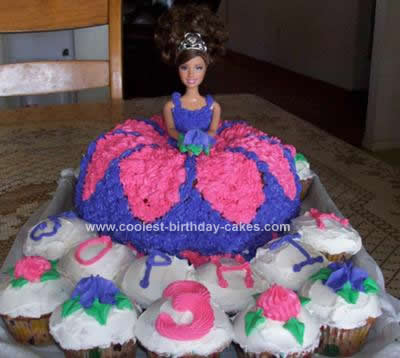 My daughter Sophia was turning 3 years old and was really into Barbies. I saw a couple ideas in a Wilton yearbook and thought “Hey, I could do that!” I love to bake and love the way a decorated cake looks with effort and time put in to it, so I decided to try and here is my Pink & Purple Princess Barbie Cake. I didn’t want to spend much money, so I decided to use a Bundt cake pan and one of my daughter’s favorite Barbie’s instead of purchasing the kit. I also used a 9 inch round pan for an extra layer on bottom and also made 24 cupcakes.

I used three boxes of rainbow cake mix. My daughter wanted a princess theme so I used a Barbie with a tiara. I stacked the bundt cake on top of the round layer and put in 2 cupcakes in the hole in the middle of the bundt. I pulled off the legs of the doll (they can be put back on easily) and put the bottom part of the Barbie into a third cupcake. I added the third to the two that were in the middle. I used my own buttercream from a recipe by Wilton and colored the frosting in a dark pink and dark purple, since those are my daughters favorite colors.

I first started with the doll’s top and piped little stars and shells. I did a criss cross in the back. I then moved on to the skirt. I love hoe the dress looked, it looked as if it was flowing out instead of just straight down like I’ve seen in other doll cakes. I think it made it look more princessy. I followed the design of the cake pan and filled it in with stars and then I did big flowers on the bottom layer. I had never done star piping and thought to myself that I did pretty good for my first time.

In the picture I did notice gaps in the stars but I loved it and so did my daughter. She was so happy and that’s all that counts! 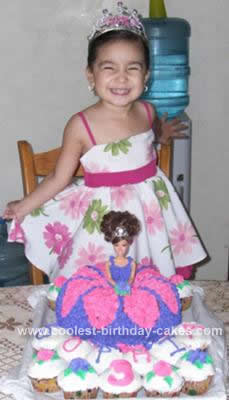