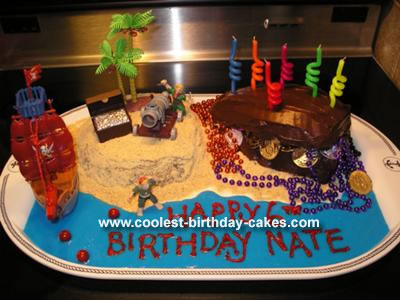 My son’s party was a pirate theme party. I had seen some pics online, and he had some ideas (a small pirate set we got at the dollar store he wanted on the cake) so I combined the two. The cake was a pirate island treasure chest in one.

For the island, I baked half a standard cake mix in a stoneware mixing bowl. This resulted in the perfect island shape. I frosted it with chocolate (because that’s all my son likes, but really white would have worked better, because you could see the chocolate through the ‘sand’.

I covered the island with ‘sand’ made of graham cracker crumbs. This brushed off easily for serving. On the island, I planted a palm tree, a pirate figure,a small treasure chest, and a little cannon (all from the set my son wanted).

Beside the island, I made a partially sunken treasure chest. This was baked from the other half of the mix, which went into a loaf pan. When it was done and cool, I cut it in half diagonally, but from the side – so that the rounded top piece made one portion, and the bottom made the other portion. It was cut on the diagonal to achieve the half sunken look (when you put it back together after icing, you put the two narrowest ends together, and that end becomes the sunken end).

Anyway, I iced the bottom with chocolate, and put some plastic coins in, then iced the top and put it back on. I put some more of the graham cracker sand around to give it the sunken look, draped some necklaces around, and added a few extra coins. In front of the sand, I made some water out of icing sugar, and blue icing tint mixed with a bit of water. I left it very thick, so it didn’t run into the graham crumbs. It worked GREAT! Then I put a little pirate ship in the water near the island, with some cannon balls around it (again from the set my son picked out).

Just before the party, I wrote the “happy birthday” in the water (since it took overnight to set up a bit), and stuck the candles in the chest. It was a huge hit!

All in all, it took 45 minutes to actually make and bake the cake (early in the day), and it took only 45 more (after the kids were in bed) to ice and decorate. I did it the day before the party, and stored in the fridge overnight. Very quick and easy!