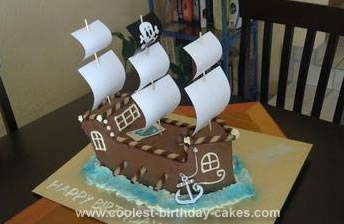 My son wanted a pirate party for his 4th birthday, so I decided to make this pirate ship for him.

My inspiration for this Pirate Ship cake came from the Australian Women’s Weekly Kid’s Birthday Cakes issue. I used my special flop-proof chocolate cake recipe which I doubled up and baked in a rectangular cardboard beer box that was lined with foil and baking paper. After baking the cake I cut it in half lengthways and then cut a quarter of the length width-ways. The two longer pieces were sandwiched together with caramel treat and one of the smaller pieces was place on one end, held in place with a skewer and cut at angles to make the bow and the other piece was place at the other end to make the stern. This piece had to jut out slightly at the back and was also held in place with a wooden skewer.

The ‘water’ is just butter icing that’s been sprayed with blue food coloring. The cannon balls are 4 chocolate coated malt Chuckles stacked and held together with icing.

I printed the anchor, treasure map and jolly roger flag on card using a colour printer and the sales are white card cut into squares and threaded onto wooden skewers. All in all the cake was a huge success and pretty easy to make! 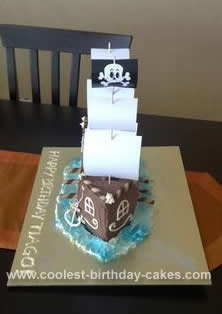 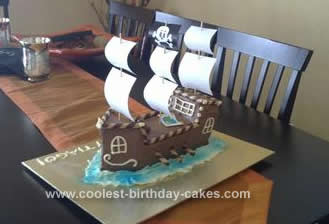 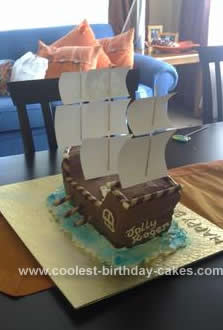