My son’s 5th birthday was pirate themed.  I have been enjoying making 3-D cakes, and I had seen lots of great ones on this site for inspiration!

The “ocean” was an 11×15 white sheet cake. I colored in blue to make it look like the ocean even after it was cut. For the ship I used the same 11×15 sheet pan, but cut it in half. I used a chocolate fudge for the ship. I stacked the two pieces and cut down for the deck. Part of what I cut out, I used to build up the captain’s area and doweled it to keep it from shifting.

For the railings I used peanut butter bars. I just took the layers apart to make them thin like a railing. I used raisinettes for cannon balls and root beer barrel candy for gun powder barrels. I piped in yellow frosting for detailing and put blue and white frosting in a piping bag to make the waves. I used plastic figurines for the pirates.

This cake got lots of ooh’s and ahh’s from the guests. I was one of the easiest and best looking cakes that I have made so far. 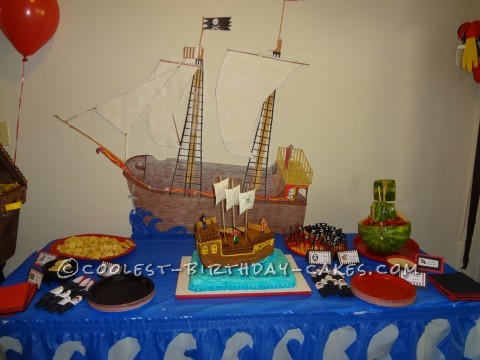