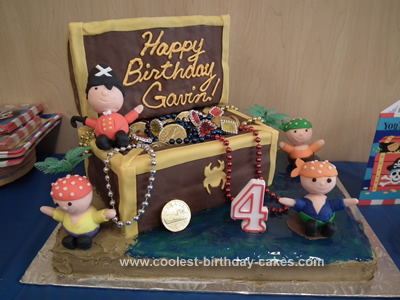 This Pirate Treasure Cake was for my son Gavin! He loves pirates so I thought I could get creative since making a ship terrified me.

First I started with the base, just an 11×15 slab of cherry chip cake. I covered it with brown icing and then added crumbled cookie for sand and blue gel icing on top for a water effect. Also used some palm trees found at the Dollar store for decoration.

Next came the treasure chest. Again, I baked an 11×15, cut it in half, stacked it, shaped it and then hollowed out the center a little so that I could fill it with treasure later. I covered it with icing, then the fondant in brown with the yellow edging. The top of the treasure chest is a piece of Styrofoam cut and

shaped, then iced and covered with fondant to match the base. Long wooden skewers were used to keep the top attached. Used a little playdoh cut-out to make a little crest on the front.

Once this was all done I placed the treasure inside and piped on the message. The pirates heads and bodies are made of preformed Styrofoam balls, which I covered with icing and fondant in the various colors. I kept them together with toothpicks. The arms, hands, legs and feet were just fondant shaped and attached with toothpicks. Once done they were placed in areas that were kind of plain.